Doubleblind: The Menace of Route 119 Thruway Traffic on Spruce and High

Great editorial by Liana Krissoff on possibilities for revitalizing downtown (“A Walkable Downtown is a Sittable One,” Dominion Post, July 15).

The major structural problem with downtown Morgantown is that it is a cement gully of thruways, with nearly no tree shade and virtually no pedestrian malls or parklets. “Downtown” is a harried narrow traffic corridor, practically an industrial zone. Even the sidewalks are narrow and have the feel more of heavy machinery operations in an industrial park than of a stream of urban parklets and pedestrian plazas for shopping and obtaining public services, and for public congregating for walkabout exercise, entertainment, and socializing. The all-consuming traffic corridors of downtown – let alone the heavy trucks – gut the public social and economic nature and possibilities of Morgantown.

Why? Blame Route 119, which runs along basically 16 blocks of downtown, coming and going mainly on Spruce and High streets. Route 119 should cover only 4 blocks and not run along Spruce or High at all, only cross them. If this structural change were made, then the equivalent of at least half a dozen street blocks, mainly on Spruce and High, could be converted to tree shaded pedestrian malls or parklets, with adjacent tree-covered non-thruway parking and access drives.

This would provide the public much more relief from the sun in summer, much more space, much more leisure and exercise opportunities, much more room for pleasant outdoor social and public activities, and access to public services, while providing local businesses with the crowds they need to thrive. This would greatly transform – structurally and socially, environmentally and economically, the cement gully thruway that is currently downtown Morgantown.

Structurally, it’s an efficient if somewhat costly fix. The engineering would be impressive, possibly a swooping S shaped configuration south on (new) Route 119 from Willey Street to Beechhurst Avenue to manage the approximate 50 foot change in elevation over about 650 feet, as compared to the 40+ foot change in elevation over about 550 feet going north on Route 119, from University Avenue up Pleasant Street to High Street. This change would be less steep and more robust but otherwise similar to Campus Drive where it curves and changes 80 feet of elevation over 850 feet between Beechhurst Avenue and University Avenue.

Route 119, which comes south from PA near UHS, then up Easton Hill and across the Mileground should not run across the Mileground into downtown. It should instead be diverted at the airport to run down Hartman Run Road (Route 857) to Route 7 and Green Bag Road, and then continue on up past Dorsey’s Knob, skirting downtown Morgantown entirely.

Route 119 traffic that actually needs to get to downtown would continue across the Mileground with interstate traffic and go through the roundabout onto Willey Street (while picking up traffic from Route 705). All this traffic would continue to follow Willey Street downhill, crossing Spruce Street to High Street, and instead of turning onto High Street, cross it to continue on Willey for an additional block. Then two new blocks of streets would need to be constructed by the state downhill through parking lots at that point to connect immediately with Beechhurst Avenue, at the existing intersection but reconfigured there on Beechhurst.

This simple realignment would remove ALL traffic of Route 119, the Mileground, Route 705, Wiley Street, and Richwood Avenue, etc, from the downtown main streets of Spruce and High, which could then be converted largely to tree-covered pedestrian malls, with some non-thruway parking and some limited-access non-thruway drives.

Route 7 with its heavy trucks could and should also be diverted from downtown (including the bit of Spruce Street that it destroys each year) and onto Green Bag Road, with forthcoming improvements there. Even without a Route 7 diversion, a serious Route 119 realignment would greatly transform downtown, create it anew.

It’s time to get rid of the menace that is Route 119, and all of its conjoined traffic on Spruce and High, which is largely to blame for the existing cement gully of downtown Morgantown that is the cause of many of downtown’s business, social, health, structural, and environmental problems.

Meanwhile, the end of Green Bag Road should be aligned into a single intersection with the end of Smithtown Road to get rid of the insanity of that deadly double-blind intersection there. The City, County, and State all have known financial mechanisms that could fund that studied and known fix there, at any time they feel so inclined to get it done. The public should actively press for these badly needed changes and improvements.

Satellite maps show that not only is downtown a cement gully (traffic corridors) with no tree canopy but basically a sprawling paved parking wasteland with no tree canopy. Both conditions are destructive of public, social, and economic life (not to mention health, environment, ecology).

Because of the local geography, downtown will always be a hub of traffic. An engulfing web of roads feeds to and through it. That will always be the case. The question is to what extreme. Everything will continue to feed toward downtown but much less should feed through the very center of downtown.

That any US or state route runs through central downtown Morgantown main streets at this point – let alone for dozens of downtown blocks (Spruce, High, Pleasant, Walnut, Brockway) – is an abomination for city life. Long ago it was necessary. Now it is a menace, including for drivers just trying to get through.

Downtown Morgantown needs the shock to the system that blocking off Spruce and High would bring, in my view. Readily re-locating Routes 119 and 7 is imperative. A third parking garage could enable the city to begin to cover the remaining downtown lots and areas with tree canopy.

It is also conceivable, maybe more conceivable, that central Spruce and High could be well converted to combos of pedestrian mall and essentially single lane, one way semi-thru-parking lots with angle parking, not parallel parking, and the sidewalk greatly expanded along one side of each street into a green mall.

Any way you go, you have to get the nearly two dozen blocks of US/state routes entirely out of that downtown area/corridor. This is the only way to eliminate thru traffic and create enough space (while maintaining parking) to get a significant tree cover into downtown. Instead, you could try to take out or reduce the parking lots and plant trees but that won’t be supported enough to matter, especially with the high amount of thru traffic and big events that sometimes occupy all the spots. Not to mention lunch hour, in some locations. In any case, the tree canopy is needed for pedestrians, and crowds, and pedestrian activities (like shopping, residing, servicing, exercising), not for the existing enormous amount of commuters and thru traffic.

Downtown is a chaotic mess because it is primarily a drivethru zone and not primarily a destination zone. It will always be a hub of driving, transportation. Now it needs to take the next step to not be the sliced and diced gully and paved wasteland of a commuter corridor and industrial cut-through that it currently is.

In the meantime, getting a really green parklet into downtown would be a great accomplishment (as significant or more significant than the farmer’s market area, in my opinion) and potentially give much impetus and vision to Liana Krissoff’s larger green web idea. It would better show the need, benefit, and possibilities for rerouting the arterial roads too. 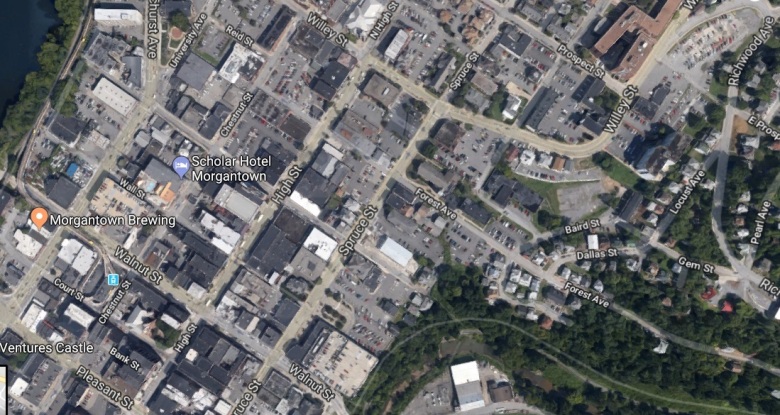