Gas Stations Are Not School and Child Friendly

If Sheetz puts in the gas station by the school that it has wanted to put in for months, the children of Eastwood Elementary would be exposed to additional toxic vehicle exhaust pollution and likely other fumes from the station. Children and gas should not mix.

Anyone who has ever pumped their own gas downwind of the tank knows the tell-tale smell of fuel. But even from a distance those fumes linger. Researchers in Spain found that gas fumes contaminate the air up to 100 meters, or 328 feet, away with potential health hazards.

The airborne chemicals came mostly from unburned fuel evaporating during refilling of the stations’ storage tanks, during automobile refueling, and from spillage. The researchers from the University of Murcia measured the levels of two common gasoline related pollutants, benzene and hexane, in the area around the stations. They then compared these levels to the contamination caused by normal automobile traffic, and found higher levels in areas around gas stations.

At least four people were killed and at least two critically injured Tuesday when an explosion leveled a gas station in this southern West Virginia city, officials said. Among the dead are a firefighter and a paramedic, state fire marshal spokeswoman Celeste Hinzman said. The volunteer fire department was at the Flat Top Little General Store to evacuate people after a report of a leak in a 750- to 1,000-gallon propane tank, Raleigh County Sheriff Danny Moore said. One ambulance that was on the scene to help with the evacuation “disintegrated,” he said.

During the week of July 21, 2008, staff noticed the appearance of strong gasoline odors in the daycare center. In response, they contacted the Wisconsin Department of Children and Family Services, which subsequently contacted WCHD and DPH. On August 13, 2008, staff from WCHD and DPH visited and evaluated the daycare center for gasoline vapors (WCHD 8/13/2008).  The director of the daycare center reported that gasolinelike odors first appeared in the building during the week of July 21, 2008, with odors noticed inside of the daycare center art storage room, which is in the rear of the daycare center.  The owner of the convenience/gasoline station store said the appearance of this odor in the daycare center resulted in the discovery of a gasoline leak and there was a subsequent removal of a reported 20 gallons of gasoline from a containment crock located beneath the pump island, which is approximately 50 feet south of the convenience/gasoline station store.  At this time it is unclear how vapors migrated into indoor air of the building from a gasoline product release beneath the pump island.

Stop cancer before it starts

DOES LIVING NEAR A GAS STATION CAUSE CHILDHOOD LEUKEMIA?

LONDON – Living near a fuel station may quadruple the risk of acute
leukemia in children, research published yesterday showed.

And the longer a child had lived nearby, the higher the risk of leukemia
seemed to be, showed the research, published in the Occupational and
Environmental Medicine journal.

Crews say it could have been a lot worse.
By Courtney Dunn

MORGANTOWN — A fire at a gas station started just before 11 a.m on the Mileground. An electrical fire started in canopy right above the gas pumps. Workers shut the pumps down immediately. A truck driver who works for a local natural gas company was going by, saw the flames and jumped in to help. Four fire departments closed the Mileground as a precaution. 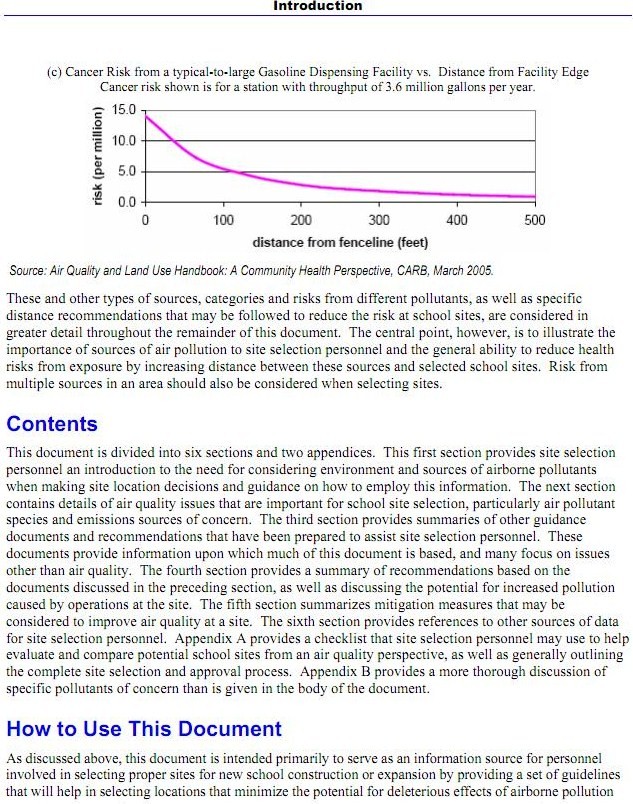