WHY IS THE DOMINION POST TERRIFIED OF COUNTY COMMISSIONER TOM BLOOM?

Ahahahahahaha!!! Somewhere, not too very far away, comedian Lewis Black is laughing gleefully. “This stuff writes itself!” he cheers.

The latest DP would-be pontification against Commissioner Bloom does not even sound as if written as drunken spiel this time. It’s sober, very sober in tone. The April 22nd editorial is quite seriously (however ungrammatically) titled, “When and what you say no to”. And why not be serious and sober? After all, in this latest bit of lunacy, the DP self-proclaims itself to be “the public’s advocate.”

Too often, clearly, the Dominion Post is the public’s devout bane. Not to belabor the obvious.

This Dominion Post editorial is, no surprise, full of ridiculous and false statements.

The DP pretends that Tom Bloom – a longtime high school counselor and a newly elected County Commissioner – should have “reassured himself [prior to the election] that he was eligible for flex time.” First, Bloom is eligible for flex time, just as are other school employees, a number of whom in fact receive it. However, in Bloom’s case, for no good reason, and for allegedly unscrupulous and unlawful reasons, Superintendent Devono has chosen to deny Bloom flex time. Thus, Bloom is suing. Second, for Bloom to sue prior to his election would have been a ludicrous and outrageous burden. Superintendent Devono has chosen to act in a highly suspect manner – actually, again, like a scoundrel – in denying newly elected Commissioner Bloom flex time. This base act by Superintendent Devono is neither Bloom’s fault nor his responsibility.

Lawsuit or no lawsuit, denying Bloom a meager bit of flex time is baseless, scoundrelous, and detrimental to everyone involved, to the general public not least. It stinks wildly. The Dominion Post has chosen to lie with the shit and garbage of that decision, a position in which the DP seems very comfortable, and from where it cheers and pontificates.

Lewis Black could only marvel. We all can.

The Dominion Post decrees: “Policies, laws and meeting times don’t conform to your availability or whim, you comply with them.”

We’ll leave it as an exercise to the class (or, say, to the community) to pick apart the multiple canards and falsehoods embedded in that bogus claim. Simpleton decrees are readily shredded. Anyone who wants to take the time could proceed at length in eviscerating detail.

One final laugh – the DP’s claim that County Commissioner Tom Bloom is hurting “the public’s interest” given Mon Schools’ expenditure of “taxpayers dollars as the school board defends itself against [Bloom’s] legal action.”

Lewis Black time again. If Superintendent Devono and the school board had not denied Bloom an hour or so of flex time every other week to attend County Commission meetings, then there would be no legal action. Thus, the egregious, not to mention unprincipled, wasters of taxpayers’ dollars here are the Superintendent and the Board of Education. They would rather waste taxpayers’ dollars than give up their position in the sewer, a repugnant position from which they may or may not be forced by the courts. The Dominion Post is willfully stupid and working against the public interest in cheerleading and defending this excrement, unprincipled power. No surprise. That’s in its very nature. 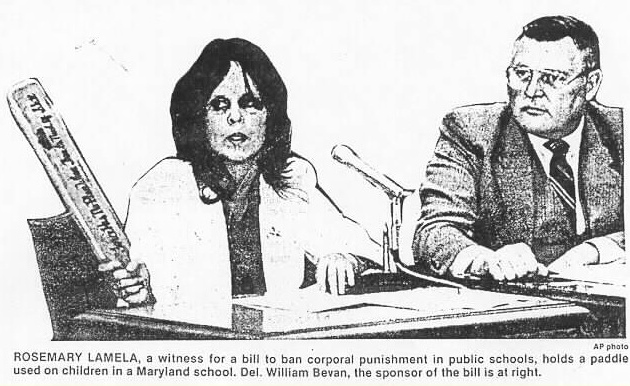 Jump into the sewer with the Dominion Post anyone?

As previously noted in “The Mean, The Green, and The Phony“:

Why is Mon Schools so mean?

Oh, that’s right, the Mon Schools Superintendent is on record as a strong advocate of corporal punishment in schools. Hitting kids with heavy paddles, blocks of wood. That is “spanking” in schools. In 1987 the Charleston Daily Mail (Jack Deutsch, February 18) reported that Frank Devono

the president of the state Association of Elementary School Principals…complained that opponents of corporal punishment always emphasize that paddling is a negative experience.

“Where is the positive? Why is it always the negative?” asked Frank Devono, president of the principals association.

We don’t make up this idiocy, folks. We just report it. Yes, adults hitting children with blocks of wood is such a “positive” experience for everyone involved. Of course. Who could imagine otherwise? Not Devono.

Devono spoke in favor of the bill, which would remove the 12-hour “cooling off” period. Under current state law, principals must wait 12 hours after warning students of a paddling before carrying out the punishment.

But the intended mean green school on the 705/Mileground intersection goes thumping forth under the firm hand of Superintendent Devono.

And yes that’s right Mountaineer fans, the mean green school goes on in apparent full accord with the oh so enlightened officials of West Virginia University who would sell farmland for the school. In this putrid deal, the money-grubbing hands of WVU will be cash-filled as the esteemed university leaves the scene.

WVU and its Board of Governors must be so proud to be contemplating selling THIS land at THAT intersection for THOSE purposes.

It’s mean. It’s phony. And not a little bit idiotic.