The City of Morgantown Elections: Absurdity In Defeat

LUDICROUS STATEMENTS FROM THE LOSING MAYOR AND THE CLUELESS MEDIA

But what more in victory?

The political action committee Morgantown Together won 5 races and 5 seats on the Morgantown City Council yesterday and lost none, an undefeated election season.

Of the 4 council members who voted these past couple years as a Backwards Bloc, two were defeated, including Mayor Jim Manilla, also Linda Herbst, while the other two stood for re-election unopposed: Ron Bane and Wes Nugent. It seems apparent that Morgantown Together could have run Mickey Mouse again against Bane and defeated him handily, while Nugent, who is the most personable and youngest Backwards Bloc voter, would also have been seriously challenged and quite possibly defeated by virtually any Morgantown Together candidate.

The absurd and petty hypocrisy of the two defeated Backwards Bloc candidates was striking in the run-up to the election. Both Manilla and Herbst ran inane and vapid ads denouncing the Morgantown Together candidates for running as a group, and yet these Backwards Blockers had no compunction against their own continual voting as a group throughout the past years.

Even more striking, some excellent investigation and reporting work by Sam Wilkinson at his blog shows the unmistakable signs that the Backwards Bloc councilors and BB-aligned candidates themselves operated as a group under the designation “Victory for Morgantown”. They lost every contested race. For the politics behind the politics see Wilkinson’s findings:

“The very, very low number of voter turn out.” contributed to his defeat says Jim Manilla.  “We expected a lot more, we were hoping that people really followed the issues.” he says.

The irony is that Mayor Manilla largely led the charge to do away with Vote By Mail (VBM), which had helped raise voter turnout last election to a relatively high 25 percent. With no VBM this election, voter turnout was cut nearly in half. The further irony is that the VBM election had swept 3 of the 4 Backwards Bloc councilors into office, only to be swept out in both contested races after voting in bloc, 4-3, to get rid of Vote by Mail. By all appearances, most of the registered voters who turned out did pay attention to the issues, and voted accordingly.

WAJR has been pronouncing repeatedly on this the day after the election that the low turnout shows that city residents were “not interested” in the election. In reality, the city council dominated by the Backwards Bloc were the ones “not interested” in making democracy and governmental decisions as accessible as they should be, as they need to be.

WAJR morning host Kay Murray, evidently demoralized by the election results, showed virtually no interest in discussing the elections and was astonished at how long she thought it seemed to take to get the final count (after the ultimate results had been made plain by the early returns). She was swiftly informed by the city manager that it took far longer to tabulate the results in the previous election, 3:30 a.m., when the Backwards Bloc swept into power, as compared to 11:30 p.m., this time, when the Backwards Bloc was utterly broken up.

The need for independent media in Morgantown remains painfully obvious.

The configuration of the Morgantown City Council was significantly improved by these elections, but is it very promising? Not really, not apparently. Without a strong and serious, let alone any, city council push for comprehensive annexation, the city can do little to banish or remediate much of its current woes. And therein lies probably the great part of the reason for low voter turnout: even the new city council, which could do so much, seems so bound and determined to do so little – and it shows – it shows badly – not least to would-be voters.

HOW PATHETIC IS THE CITY OF MORGANTOWN? 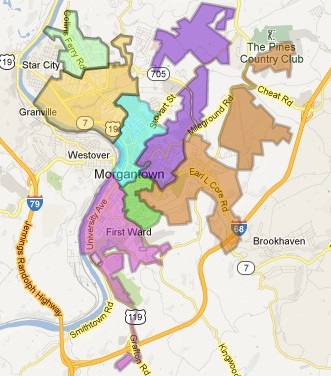 The map of the city of Morgantown, West Virginia looks like a block of swiss cheese half-eaten by a pack of rats.

Then look again at the map. See those light spaces around 705 and Mileground Road and Cheat Road and Greenbag Road (between First Ward and Earl Core Road)? All those spaces are loaded with business and commerce that pay no B&O (Business & Occupation) tax to the city – unlike every other city business (those located within the darker colored sectors, the city itself). So this is how the city is gutted – in fact the whole area – fiscally, and socially, and physically. Businesses in the city pay B&O taxes to help support the city that helps to support them. But businesses technically located “outside” the city pay no B&O taxes even though those businesses would not exist if not for the city. It’s wrong. It causes the city to suffer. It hurts the city residents and the city workers. And thus the people of the county suffer, and the students and employees of WVU.

While much of the city of Morgantown is nice enough, providing a good place to live for many, the lousy roads, the crumbling or non-existent sidewalks, the pollution and traffic menace (not least by heavy trucks), the lack of high quality public schools, the badly underdeveloped parks system and public spaces, the dire lack of housing and services for the homeless, the endless rows of slum housing for WVU students, the trash, the fights, the fires – the perennial lack of funds for pressing social needs, employment needs, and quality of life – is outrageous.

How pathetic is the city of Morgantown? So pathetic it had to beg Monongalia County for half a million dollars in a loan to build an access road to the forthcoming light industrial park by the airport.

How pathetic is the city of Morgantown? So pathetic it could barely agree to buy the great public space that is the old Woodburn schoolgrounds, having to scramble to find less than half a million dollars to be paid out at a mere $70,000 annually over seven years to the county school system. And so pathetic that is lacks funds to even marginally let alone fully develop that great public space and many others.

How pathetic is the city of Morgantown? So pathetic that it has stated is has no money this summer for paving the crumbled city roads.

How pathetic is the city of Morgantown? So pathetic that is has virtually nothing new to offer this year toward the city’s perennial problem of homelessness.

Pathetically, we the people of Morgantown have failed to take the one most obvious and most effective step to remediate these problems and more. The obvious necessary, and proper, step is annexation. Morgantown must annex the pockets of land and commerce that miraculously fall outside the city’s current boundaries. These are business-heavy areas that ought to be paying B&O taxes to the city. These businesses benefit mightily by their proximity to the city. Virtually surrounded as county islands within the city, these swaths of business enjoy high visibility and direct access to the many city residents and city workers and city amenities and consequent continuous flow of city money and city support. Yet none of these businesses reciprocate with any B&O taxes to the city, being technically located, in county pockets and islands, beyond the city boundaries though virtually wrapped within the city boundaries. See the map. See the commercial sectors along WV 705, and Greenbag Road, and Hartman Run Road, and the Mileground, and US 119 out to Glenmark Center and to Pierpont Landing. The businesses in these areas make their money directly and indirectly off of Morgantown city residents and Morgantown city workers and Morgantown city infrastructure and Morgantown city services, which are supported by city funds. The city funds consist largely of B&O taxes. Thus these non-city businesses, which also create additional traffic and pollution and other problems for the city, and which operate in such close proximity to the city, should pay B&O taxes, which will only occur if they are incorporated into the city. These many businesses are essentially an indivisible part of the city, yet they have not formally been made part of the city, and thus do not pay their fair share. They do not pay what current city businesses pay, and they will never contribute as they should until the city of Morgantown properly fleshes out its boundaries by annexation – to both interstates, and beyond.

Annexation, by providing the additional B&O taxes, would solve a lot of city problems and quality of life issues, and many other problems could be remediated. This annexation should have happened decades ago. The Morgantown City Council continues to offer no leadership on this most pressing of issues, and the people of Morgantown have not remotely sufficiently pressured the Council to get it done. The city deserves better. The county would benefit as well. So would WVU. The need is very great. The rewards would be great. The city must increase its pathetic revenue stream by long delayed annexation to address its long neglected needs.

The City of Westover is far ahead of the City of Morgantown in properly pressing for the long overdue and badly needed annexation of the mall and other commercial operations in immediate proximity to that city.

One Response to “The City of Morgantown Elections: Absurdity In Defeat”