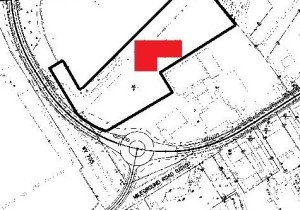 The intended approximate school property (still not purchased from WVU and not even up for WVU BoG vote to sell until November 12) is about 7 acres inside the black bold lines. The approximate school building is in red. Parking would be to the left, playgrounds to the right, and internal roundabout below (in front of the building). That’s right, a roundabout upon a roundabout just to get to the school. The site is so thin and crowded by the highways and by the intersection and by the sheer dropoff at back that there is nowhere else for vehicles to go.

US 119 (at right and bottom) carries many thousands of vehicles per day additionally. The intersection congests at school hours morning and afternoon. The WV Division of Highways notes that even the impending road expansion (pictured above) to 4 or 5 lanes will not eliminate congestion. The expansion will increase traffic.

Because the entire long back edge of the school property is sheer dropoff and because there are no outlets away from WV 705 and US 119, the whole intersection area can congest and gridlock and lead to student entrapment.

The DoH roundabout spoke onto intended school grounds is not pictured because Mon Schools kept the site secret for so long that the DoH could not initially plan for it this past spring (the site was not revealed publicly or to the DoH until mid-March). We are awaiting the DoH graphic with the added spoke.

The school building would be within 150 meters of WV 705, US 119, and their intersection all. California statute bans new schools within 150 meters of high traffic roads due to scientifically demonstrated harmful pollution effects (that actually extend to 200 meters, which may cause the law to be extended).

But most relevant, West Virgnia Board of Education state rule bans schools that are not:

“located away from hazards and undesirable environments, such as…arterial highways, heavily traveled streets, traffic and congestion…noise…taverns…[and/or] situations where a combination of factors such as those presented above could contribute to the possibility of human entrapment.”

Again, this intended site violates ALL these conditions (not just any one, which is all that is required).

The intended school is located at the intersection of two arterial highways, which are heavily traveled streets, that congest during and around school hours every school day. The noise is extreme due to the echoing cliffs across the road across the hollow. The bar and gambling spot is located by the intersection. And intersection congestion combined with the backing sheer ravine could easily entrap the student body in a crisis. The only way out is through the often and easily choked intersection.

About the only way the intended school could be located any more in the way of the “arterial highways, heavily traveled streets, traffic and congestion…noise…tavern….[and/or] the possibility of human entrapment,” banned by law, would be if the classrooms were built inside the roundabout rather than just off it and if the playgrounds were set up on the median strips of the two thruways. Otherwise, the intended site is basically as unlawful as can be.

That this is a stupid, asinine, fraudulent, and negligent site for a school we have demonstrated in great detail.

That this is also a clearly and blatantly unlawful site for a school remains for the state to enforce.

The site cannot be considered legal. It is evident:

b. Noise, toxic gas escapes from railroads, airports, and odoriferous plants or industries

f. Situations where a combination of factors such as those presented above could contribute to the possibility of human entrapment