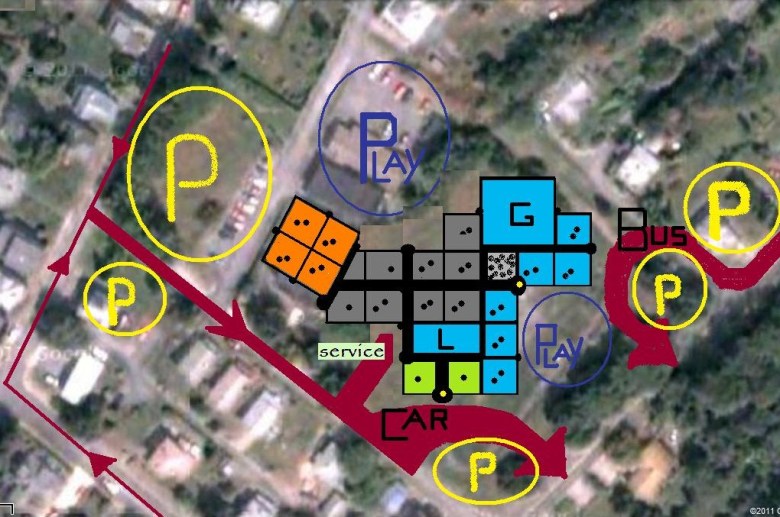 Above is a south-facing design for a building of approximately 60,000 square feet and about 500 students on slightly expanded Woodburn schoolgrounds. A rough mock-up that could be variously modified.

Terrace Elementary has six levels but none of the levels is more than two stories above the ground, due to the incline of the sidehill that would be somewhat excavated and graded.

Triple or quadruple wide terrace stairs (like WVU’s Mountain Lair terrace stairs but fully bounded) would be sky-lit, and would lead from drop-off/pick-up to the fourth level, which is at the level of the basement of the original structure. (Two elevators would be available for the infirm or differently abled.)

The two main entrances to the building, for students and visitors, are the yellow dots, one for buses, one for cars. Card access entry would be provided to teachers and other workers for several of the other entrances.

Busing is off Richwood Avenue, via Hartman Run Road (857). Car driving is also via Richwood by way of Hartman (through the loop briefly onto Charles Avenue then Fortney Street).

Terrace Elementary provides for the large consolidated school if need be. It could be readily downsized to a small or more modest scale if Easton gets its own school, as it should (perhaps on the 94 acres of the UHS campus, which is on border of the catchments of Easton Elementary and North Elementary).

Terrace Elementary also improves on the current Woodburn Elementary by removing the current traffic and congestion of buses from Charles Avenue. Of course buses and cars could still use Charles Avenue and other routes besides Richwood, but the main traffic would be handled by the main street in the area, which is Richwood.

The school is south-facing to maximize daylighting and energy efficiency.

If Terrace Elementary were to be a green school, geothermal pipes could be sunk beneath the play field.

A stage should be added to any one of three sides of the gym. Or, a sidehill (indoor) auditorium could be attached to the north or west side of the gym.

The primary school and the elementary school could each have their own libraries, computer rooms, and art and music rooms – especially if the computer rooms & libraries and the art & music rooms used partly shared space, or if ample space is otherwise provided, which it could be.

Using the spacious and sky-lighted terraced stairs several times per day would provide a unique aesthetic experience and provide significant health benefits to the students and staff. The terraced stairs with broad landings would provide great spaces for murals and other artwork, for certain types of science experiments, for vegetated green space, and for experimental out-of-classroom activities.

Additional parking and playground space for the school site could be obtained sooner or later by way of willing sellers.

Terrace elementary would be a great nearby school for students to attend who would otherwise attend Easton, Brookhaven, and Mountainview since the borders of their crowded catchments are so very near to Terrace Elementary. Also, students from South Park who currently travel all the way across town to attend the high quality schools of Suncrest Primary and North Elementary could instead find a good nearby school in Terrace Elementary.

The Woodburn schoolgrounds continue to be a great and badly needed place for a new school.

Notice that Easton Elementary is misplaced on the catchment map (above/below). In reality, Easton school sits a couple miles south of its mapped location, below the “a” in “Cheat,” exactly where US 119 forms a sharp elbow (within that elbow, or nub on the map). However, the map falsely yet curiously places Easton Elementary at the spot of the new University High School campus, which, with its 94 acres, would provide plenty of free land upon which to build a highly accessible new elementary school to replace the grossly inadequate existing Easton school.

These are 2005 school districting maps, the most recent maps Mon Schools provided when requested by FOIA.

Not only do the Woodburn schoolgrounds all but border the catchments of Mountainview, Brookhaven, and Easton elementaries, the schoolgrounds are also close to North Elementary’s catchment and part of Suncrest Primary’s catchment. This is great positioning for a rebuilt or new school, near the conjoining of the catchments of these five old schools, which are all crowded or overcrowded or larger than should be.