Superintendent Frank Devono is going way beyond the bounds. It was on WAJR quite a few months ago that Mon Schools Superintendent Frank Devono first threatened that he could have put the new “Eastwood” Elementary miles outside of Morgantown at the new University High School (UHS) site. He renewed that threat in a meeting with the Dominion Post this past week, reported in today’s article, “Date for levy vote uncertain“:

“We can take the same school [Eastwood] and put it up at University [High, on Baker’s Ridge Road],” he said.

Recall: this (new) UHS site is NOT one of the 19 sites that Mon Schools investigated and considered via their hired architect, who presented on the 19 investigated sites at Mon Schools’ board meetings over a period of months, March-June, 2010 (see map, bottom).

The architect’s final evaluation of sites consisted of three sites: the existing Woodburn schoolgrounds, the area near old UHS/new Mountaineer Middle, and a mystery location (the exact 705/119 intersection location on the Mileground that Mon Schools refused to disclose at the time).

The new UHS site was never considered, to the public’s knowledge, in the architect’s site selection process. Never.

The superintendent threatens to send Woodburn Elementary students most of the way to Pennsylvania, beyond the bounds of all the other Morgantown area elementary schools: 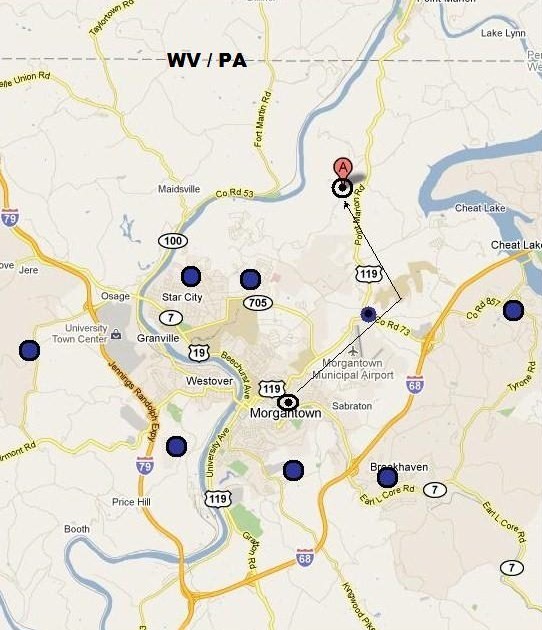 Pictured above, as blue dots, are the Morgantown Area elementary schools. From left to right along the top line: Mylan Park, Suncrest, North, Easton (black dot on blue), Cheat Lake; from left to right along the bottom line: Skyview, Mountainview, Brookhaven. The center black dot encircled is Woodburn Elementary. The top black dot encircled, most of the way to Pennsylvania, is the new UHS site, which the superintendent threatens as the Eastwood alternate site. This brilliant idea would send the innermost city schoolchildren to the outermost Morgantown area school.

“We can take the same school [Eastwood] and put it up at University [High, on Bakers Ridge Road],” he said. “But then it really loses the community feel.”

One wonders: What sort of “community feel” does the new high school have out there, after being removed from the city? It’s practically in another state. Not to mention that the intended location of the consolidated Eastwood Elementary immediately at a major commuter corridor intersection in a largely commercial district where virtually no one can walk to has exactly zero “community feel” also. (What idiocy. A commuter corridor intersection site for a consolidated elementary school has a sheer idiocy feel. No surprise then that the local communities large and small have actively and vehemently opposed the site.) Devono adds:

“I challenge you to find me a better site than the one we have [on the Mileground].”

The existing Woodburn schoolgrounds site was one of the final three sites in the full “Site Selection Evaluation for the SBA Green Elementary School for the Monongalia County Board of Education and the School Building Authority of West Virginia.” Devono’s threatened site did not even make the top 19. It wasn’t considered at all. Why does superintendent Devono continue to speak in such an arbitrary and capricious manner in regard to siting? Maybe we will need another lawsuit to find out.

The broad community consensus all along, which the superintendent and board have never even acknowledged, let alone tried to work to implement, is to build TWO modest-sized schools to replace Easton Elementary and Woodburn Elementary. Mon Schools could do so very efficiently and properly by building one on the existing Woodburn school grounds, and by building another on the UHS site (or some other suitable site), which would well serve the Easton catchment. The silence from Mon Schools on this most appropriate option is deafening, as it has been for many months.

One Response to “Superintendent Devono Threatens Again With The UHS Site”