THE FATE OF YOUNG CHILDREN HANGS IN THE BALANCE

It’s the job of the Supreme Court to be courageous to make proper decisions that go against the preferences of powerful agencies and officials.

While the local Monongalia County media and Morgantown media give constant coverage to the Penn State sexual assault scandal in their distant backyard they completely ignore the ongoing Eastwood Elementary new school siting scandal in their immediate front yard, the reckless and potentially lethal new school site impending at arterial highways banned by state Rule, a siting that could one day result in involuntary manslaughter charges against county and state education officials, given the death of a student in those safety hazards prohibited at new school sites by state Rule.

Post-calamity would be too late for child victims of the Eastwood school site, just like it is too late to prevent the damage done to the child victims in the Penn State sex assault scandal.

In both scandals, the officials have denied and tried to minimize the perception of the problem, they have rationalized and justified rule-breaking, wrongful behavior, and risk-taking with the lives of young children. In both cases, the legal position of the officials is dubious at best, and the moral positions are irresponsible, reckless, and wrong. And local and state media are silent, and therefore complicit.

Out of sight, out of mind, move along and isolate, pretend that it would be too disruptive to shift to a new, safe and lawful school site – that’s the implicit messages of the local and state media and certainly of the school officials – to deny and to minimize the stark danger of the hazardous and potentially lethal site that is the intended Eastwood Elementary school location at the intersection of two high traffic, congested, arterial highways, WV 705 and US 119.

And the vote by the WV School Building Authority in June to fund a new Kenna Elementary school in Jackson County in a prohibited industrial park goes equally ignored. Involuntary Manslaughter would be the charge upon calamity in these hazardous sites, and the price of the civil liability suits would reach into the tens of millions of dollars.

But the West Virginia media to its shame is deaf to this West Virginia scandal even as it trumpets the Penn State scandal in an ongoing spate of inexcusable hypocrisy.

Whose fault is the Eastwood Elementary siting scandal? Our fault? Their fault? Out of sight, out of mind? The dangerous school site will never be out of sight of the community, the tens of thousands of vehicles that scream past and around it every day, engulfing the schoolgrounds. But the scandal is totally out of sight of the West Virginia media. It’s West Virginia’s fault. It’s a homegrown scandal cultivated in a culture of top officials and the media who looked the other way instead of doing the basic and in depth investigating and reporting and decision making. It’s West Virginia’s fault, and that’s why the West Virginia Supreme Court must make the courageous decision to correct the fault.

But the real adults need to step up to the plate, now. 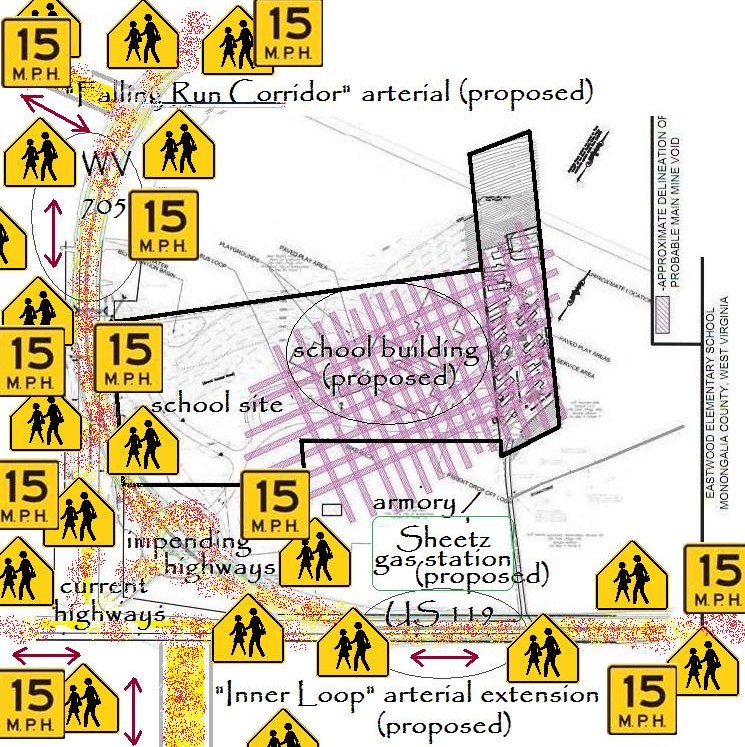