Nothing To See Here Folks, Move Along

The Eastwood Elementary new school site scandal is an even more difficult case to crack than the Penn State child sex crime scandal, which at Penn State and in Pennsylvania has revealed an institutional culture of aggression, silence, and neglect, a culture of muffling and shutting up those who would speak out.

In West Virginia, with the involvement of West Virginia University officials and Monongalia County and WV state education officials, the case of the Eastwood Elementary school site scandal reveals a statewide culture of officials looking away from grave student safety violations – and other basic violations – in which they are entangled or for which they are directly responsible, a culture of ignoring their fundamental responsibilities, a culture of willful blindness to the self-evident. It’s a culture of officials who do as they please, as quietly as possible. And even when grave violations are made public, they act with impunity.

As the Penn State child sex crime scandal gets dirtier and dirtier, as seen in the recent leaks of Penn State officials’ emails following the conviction of Jerry Sandusky, the parallels and permutations to the Eastwood Elementary new school site scandal grow more clear. Just as the Penn State officials “were interested in protecting the institution and not the children,” so too all the West Virginia officials involved in dangerously siting Eastwood Elementary are apparently more interested in protecting “the school” than the children. However, in the Penn State scandal, the Pennsylvania Attorney General is suing the Penn State officials; in the WVU/SBA/Mon Schools scandal, the West Virginia Attorney General is defending the SBA and Mon Schools against an ongoing lawsuit.

A brand spanking new school, Eastwood Elementary, at the US 119/ WV 705 arterial intersection, foisted and shoved onto the public by local and state officials, will be small comfort to any and all children smashed or daily polluted by the congested, heavily-traveled traffic vortex at the new school site.

Nothing to see here, folks. Move along. 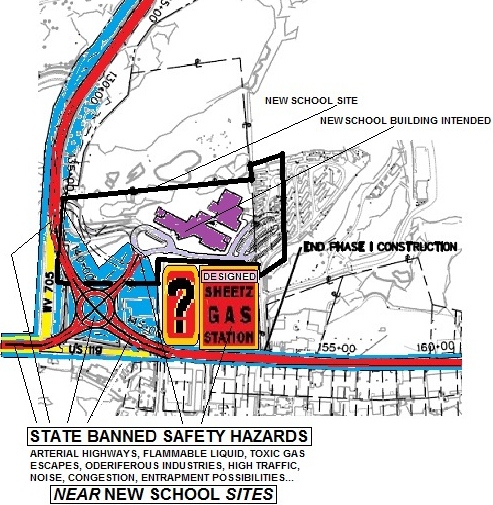 The Eastwood Elementary new school site violates the mandatory provisions of the Legislative Rule §126-172 and State Board Policy 6200, which the SBA administers. The safety of new school sites are specifically regulated by this doctrine:

The Rule mandates as follows (bold and italics added):

b. Noise, toxic gas escapes from […] odoriferous plants or industries

f. Situations where a combination of factors such as those presented above could contribute to the possibility of human entrapment

The violations of these mandatory provisions have never been specifically contradicted by state and county education officials and agencies, because doing so would not be credible: the facts are uncontroversial.

What happens here in Morgantown if a student is killed or severely injured in a crash in the high traffic, congested, arterial highways should Eastwood Elementary be built and open in a year or so at that spot that is banned by state Rule? It could be any child riding to or from school with his or her mother through that accident-prone intersection and arterials. High traffic highways, congested highways, arterial highways are each banned from being located at any new school site in West Virginia. The Eastwood site violates all those specific, explicit safety provisions, and more. And all the officials involved know it, or have no excuse not to know.

A good personal injury lawyer could properly extract tens of millions of dollars in compensation from the negligent agencies, and hit the negligent administrators with criminal charges, upon a catastrophe with such predictable potential, very much like what we are currently seeing at Penn State.

In West Virginia “Involuntary Manslaughter involves the accidental causing of death of another person, although unintended, which death is the proximate result of negligence so gross, wanton and culpable as to show a reckless disregard for human life.”

The first-rate sports journalist Dan Wetzel says of the Penn State scandal that “The time for hiding behind statements and closed doors and parsed explanations from so-called leaders are over. This demands real investigation conducted by real adults…”

Just so for West Virginia school officials regarding the potentially lethal Eastwood Elementary school siting: It’s time for the real adults – hopefully those on the WV Supreme Court – to step forward and do the right thing, bar the Eastwood siting.

If not, one “accident” – traffic crash – in those school-site arterials puts this scandal directly “into the realm of criminal negligence.”

Nothing to see here, folks. Move along.